There is no correlation between CO2 and temperature:

Specifically why should I believe that CO2 is the climate control knob? 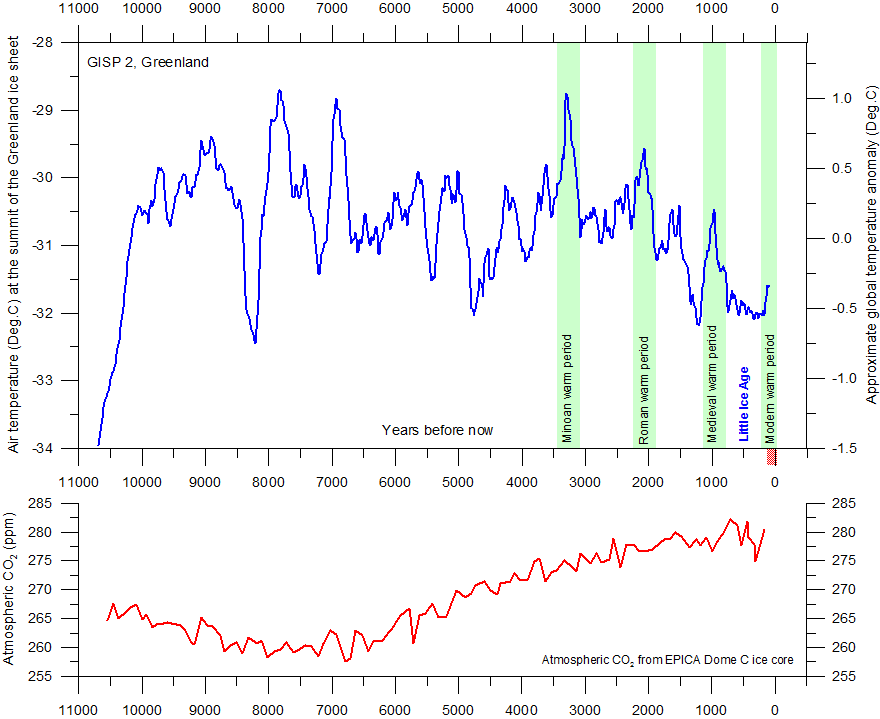 More recently it can be shown that there is no correlation between CO2 and temperature in the last few decades:

Remember When NASA & NOAA Climate Scientists Denied There Was A Global Warming Pause?

As the state-of-the-art satellite technology shows (see chart), significant global warming since the early 2000’s has been nonexistent.

There has definitely been an extended ‘pause’ (aka the ‘Hiatus’ in science journals). The pause has generated some 60+ scientific explanations regarding its existence and persistence.

This has become a real problem for many proponents of dangerous global warming, which has recently pushed them into a stance of actually denying the ‘pause’.

Empirically, since November 2000 the lower atmosphere temperature trend has actually been negative at a minus 0.12ºC per century trend. (The chart’s green curve is a 36-month average, which makes the pause even clearer to the casual observer.)

The chart also includes r-squared calculations, besides linear trends, that indicate a fairly weak 30-year relationship between CO2 and temperatures, which appears to have become a zero relationship over the last 15 years.

In review, the AGW theory is based on a CO2-induced warming of the lower atmosphere, at a rapid and accelerating warming rate – this being a result of the theory’s speculative positive feedback loop.

As can be seen, the satellite empirical evidence after 30+ years does not readily support the climate-alarmist AGW theory, nor the doomsday predictions of global warming hell.

Although the satellites are considered the gold-standard for measuring and observing sea levels, hurricanes/typhoons, ozone holes, sea ice, atmospheric CO2 distribution, polar ice sheet masses and etc., the same 24/7 technology used to measure temperatures across the entire habitable world is now being ignored (i.e., denied) due to the above inconvenient evidence.

Denying the global-warming pause has recently become a self-inflicted, nightmarish scenario for agenda-driven scientists – in a sense, they have morphed into science deniers. And all these political shenanigans, plus the ongoing NASA/NOAA data fabrication/tampering, are proving to be a significant drag on the reputation and integrity of the science community.

Which means the money on offer in Paris is based on lies and innuendo, and nothing to do with science. That’s YOUR tax money, stolen by the wealthy hypocrites like Figueres, Ban Ki Moon, and  Schellnhuber, while Gore et al  prey on the rest of the ‘faceless’ cult believers.