mis-practiced BoM … or is it malpractice

Independent science is proving the official records have failed. Adjustments (homogenization) are shown by a mixed group of independent researchers to be faulty, yet Greg Hunt brags that he prevented an official inquiry into the BoM’s practices of making things up, or mis-practices as they should be labelled. Greg Hunt says he killed off Tony Abbott’s weather bureau inquiry.

Wait til you see what Lance Pidgeon has found. He was looking at the BOM website temperature archive maps of Australia for early last century (using AWAP data). He was wondering how the Bureau of Meteorology could possibly create maps this detailed for specific days that long ago. He was especially curious about the remote, vast areas where there were no thermometers, yet there were wiggly jiggly temperature lines on the map, shaded as if they had meaning. I’ve heard that more people have visited the South pole, than have stood at the point in central Australia where the three large western and central states meet. […]

I’VE just had a paper published in the international climate science journal Atmospheric Research (volume 166, pages 141-149), in which I show there was significant cooling in the maximum temperatures at the Cape Otway and Wilsons Promontory lighthouses, south eastern Australia, from 1921 to 1950.  This cooling is even more pronounced in temperature records from the Riverina, including at Rutherglen and Deniliquin.  Indeed, while temperatures at the lighthouses (and most Australian east coast locations) show cooling from about 1880 to about 1950, they then show quite dramatic warming from at least 1960 until about 2002.  In the Riverina, however, minimum temperatures continued to fall through the 1970s and 1980s.  Pondering this issue, it occurred to me that Snowy Hydro may be responsible. […]

In fact, the models are wrong, your homogenization is wrong and Greg Hunt proves that he is a dill. And this is just September, there are many faults found earlier if anyone cares to look. 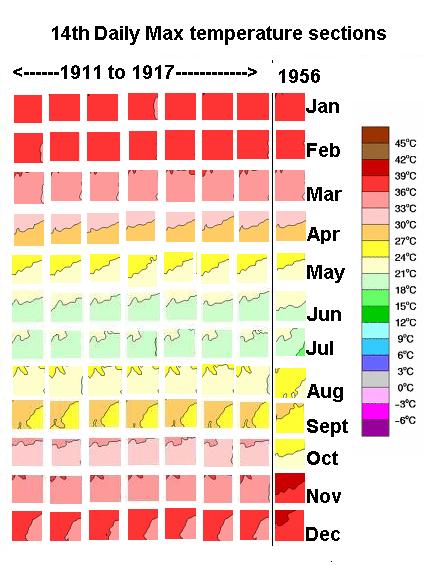 Year after year on the same day of the year, the temperature patterns are identical?

Cooking the books, Part 3 and history repeats itself, two thirds of the world’s data is made up.

1 Response to mis-practiced BoM … or is it malpractice