is this how an ice age starts? …

The Great Lakes are icebound, and likely to remain so for months:

Even Tim Blair is stuck in a Polar Vortex.

[…] This timid approach didn’t work. It meant I lacked the momentum to successfully clear a large but concealed slush-pit at the bridge’s exit. A pit that turned out to be of the precise dimensions needed to capture a mid-sized German AWD.

Game over. I was instantly immobilised. Bids to move forward or backwards simply dug the car in deeper. Adding to the fun, I was also trapped within the car by door-high snow banks.[…]

Here is an accurate graphic on the “consensus”, as determined from the data file eventually released by Cook et al.: 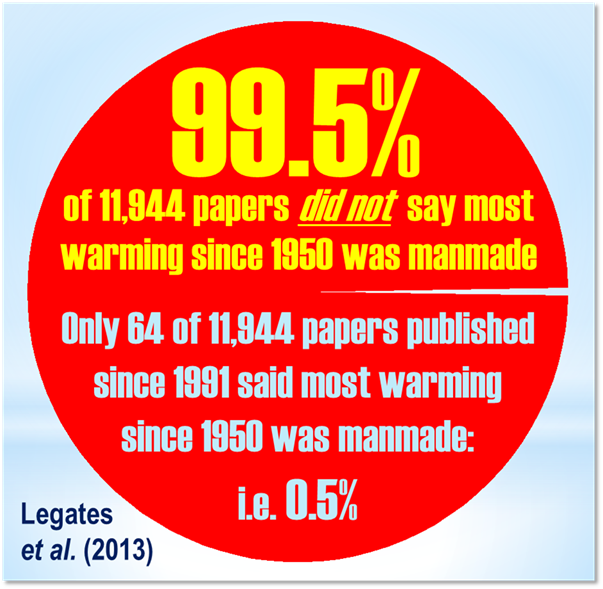 There seems to be something shoddy about popularizing the truth via colorful graphics rather than relying on the obscure, fuzzy charts that are the norm in most scientific journals. Yet if They colorize Their lies, we must popularize the objective scientific truth by making it visible to those who cannot read equations.

Mr Joshi maunders on: “Cook terms this the ‘consensus gap’. It’s precisely the outcome we’d expect from a systematic effort to distance public opinion from the outcomes of science. It’s likely this gap has been forced open by the efforts of conservative media commentators producing a relentless output of doubt.”

It’s also what one would expect given a growing awareness among all but the invincibly ignorant that my graphic is true. The “consensus” is now known to be 0.5%, not 97%.

Readers of WUWT are invited to join in the fun. Let me know, via comments, which your favorite graphs or other visual images are. I’ll include the best ones in the book.

Footnote. The Eschenbach Rule applies. If you want to take issue with what I have said here, don’t be a climate Nazi (© Roy Spencer, MMXIV). Please cite me accurately rather than rewording what I have said to suit the Reichspropagandaamt.

2 Responses to is this how an ice age starts? …