CSIRO are now practicing pseudoscience, with their latest research papers claiming sea levels are rising faster than ever along with soaring temperatures.

Well, I have news for them. The sea levels are  falling, yes, falling. Temperatures have been  falling too, including over land in Australia, and there has been no increase in SST’s for 15 years. What are these people smoking. Or is it me?

Once upon a time, CSIRO was a highly regarded research institution, that was able to provide science and research advice to farms and businesses across the nation. Even former CSIRO scientists are somewhat distressed at the current activities this bought and paid for Government owned pseudoscience group practices, such as catastrophic global warming.

Here is news of their latest, courtesy of BigPond News, with my contribution in bold. As I am not a scientist, or even a pseudoscientist, please correct me if I have got it wrong.

The article, with my comments in bold:

An issue in accurately measuring the contributions of different factors to rising sea levels was resolved.

A team of researchers say they have resolved a major issue in accurately measuring the contributions of different factors to rising sea levels.

The researchers, featuring CSIRO scientists from Hobart’s Centre for Australian Weather and Climate Research, conducted an ‘audit’ of the causes of sea-level rise.

The observed rise in sea levels across the world has not been completely accounted for in previous International Panel on Climate Change (IPCC) research papers.

So who believes anything from these IPCC hacks any more?

The two largest contributions to sea level rise since 1972 came from oceanic thermal expansion (about 40 per cent) and glacier melting (35 per cent), the team found.

Oceanic thermal expansion? Sea surface temperature has been declining. Glaciers? they have always melted and refroze with icebergs breaking off and Our Glaciers Are Growing, Not Melting.  Titanic anyone?

Other factors include changes to polar ice sheets and terrestrial storage in reservoirs and extraction of groundwater from aquifers.

Joking surely. Extraction of large amounts of groundwater can cause land to subside. Like New Orleans and the US East coast. Reservoirs? The  Aral Sea,  once the world’s fourth-largest inland sea, the Aral Sea has lost as much water as most of the reservoirs combined have gained, to irrigation. Then Lake Eyre has filled up, soon to evaporate unless the current La Nina fills it up again.

Changes to polar ice sheets? They are growing.

John Church, one of the study’s lead authors, said balancing the sea level ‘budget’ was an important part of climate change research.

Bob Tisdale and Dr Roy Spencer tell us that Sea Surface Temperatures  and UAH temperatures are falling and there is little change in OHC.

‘To resolve this, we revisited the earth’s sea-level and energy budgets together using new and updated estimates of all contributing factors for the past few decades, and including a new estimate of groundwater depletion.’

Only the last 5 words of this paragraph are correct.

The team’s findings were published in the American journal Geophysical Research Letters.

Who peer reviewed this? The Delinquent Teenager?

UPDATE 2: Running Out Of Time

Alarmists have been wildly overplaying their hand, and their time is running out. For example, the sea level team has been making multi-metre claims for some time now, which is incredibly stupid – because people would probably notice something like that.

Update 3: No one has told me that I have it wrong, yet: 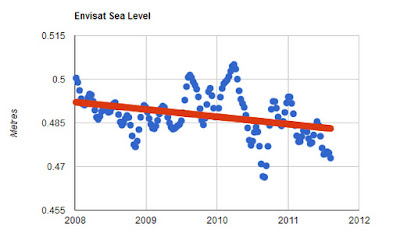