A comprehensive new paper from the Dr Steve Salisbury team of Paleontologists, of the many dinosaur trackways that inhabit Broome’s coastline, covered and then uncovered by sand washed by very big tides and cyclones.

This ground breaking paper covers the history of the trackways from indigenous myhtology and law. to the history of discovery, to the present day’s use of high technology in discovering many new species, such as the awesome Walmadanyichnus hunteri, named after a friend of mine, lawman Richard Hunter:

FIGURE 14. Examples of associated sedimentary structures within the Broome Sandstone in the Yanijarri–Lurujarri section of the Dampier Peninsula, Western Australia. A, ladderback ripples within outcrop of LFA-1, with two near subequal directions; B, interference ripples within outcrop of LFA-1, with one strong direction and two minor orientations; C, water escape structure (WES) in LFA-2 at UQL-DP9; D, Goolarabooloo Maja Richard Hunter alongside the topotype right pedal track of Walmadanyichnus hunteri (UQL-DP11-5) and a large water escape structure that perforates the uppermost part of LFA-1 and the track horizon of LFA-2. Numerous other W. hunteri tracks occur on this platform close to the raised water escape structure.

A really good read for anyone with an interest in the topic. More from the University of Queensland News.

An unprecedented 21 different types of dinosaur tracks have been identified on a 25-kilometre stretch of the Dampier Peninsula coastline dubbed “Australia’s Jurassic Park”. […]

My own pics of the sandstone pavements around Broome, hiding thousands of years of dinosaur movements: 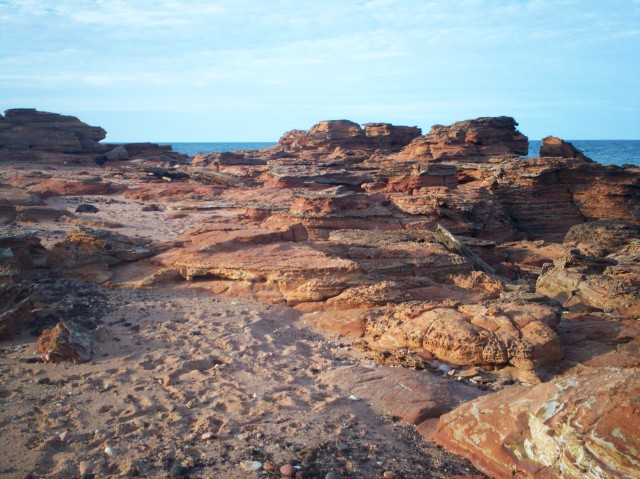 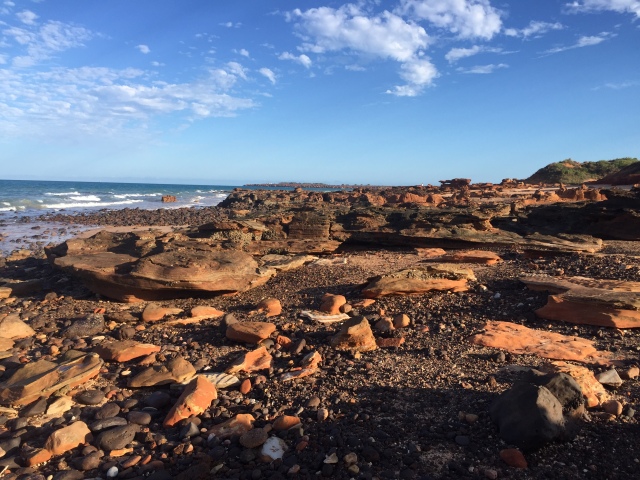