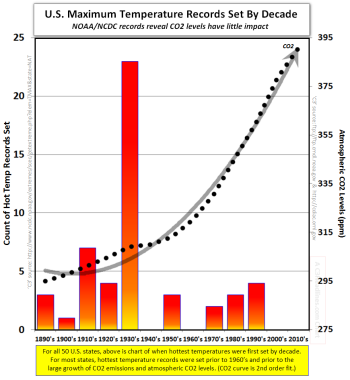 Plot of NOAA/NCDC state high temperature records by decade with atmospheric CO2 concentration overlaid. From C3 Headlines with thanks – click to visit website

The Heat Was On—Before Urbanization and Greenhouse Gases

Sure is hot out! And what better time for a paper to appear in the Journal of Applied Meteorology and Climatology describing the construction of the “all-time” records for various types of weather extremes for each of the 50 United States plus Puerto Rico and the U.S. Virgin Islands. The paper details efforts of the U.S. State Climate Extremes Committee (SCEC) established by the National Climatic Data Center (NCDC) and led by Dr. Karsten Shein. Basically, the SCEC dusted off old records and found other new sources. So now we have “new and improved” data (available here) for the value, the date and the location of the all-time high and low temperature, greatest 24-hr precipitation, greatest 24-hr snowfall and greatest snowdepth for 50 states and two territories. The statewide record extremes have been updated through 2011 and are subject to continuous updating.

This paper is an interesting read for those who perseverate on climate history and how it is constructed from a variety of observations both made from “official” (federal) observing stations as well as those deemed reliable from “non-official” observations (such as 12-oz soda bottles or credible “amateur” observer accounts). The new effort resulted in “the revision of 40 percent of the values” contained in the old dataset at NCDC and “underscored both the necessity of manual quality assurance methods as well as the importance of continued climate monitoring and data rescue activities to ensure that potential record values are not overlooked.”

It also is useful for putting the recent heat wave in perspective. Despite the 24/7 caterwauling, only two new state records—South Carolina and Georgia—are currently under investigation. And, looking carefully at Shein et al. dataset, there appears to be a remarkable lack of all-time records in recent years.